Free UK delivery over £45 and 30 days return. Orders shipped from within the UK 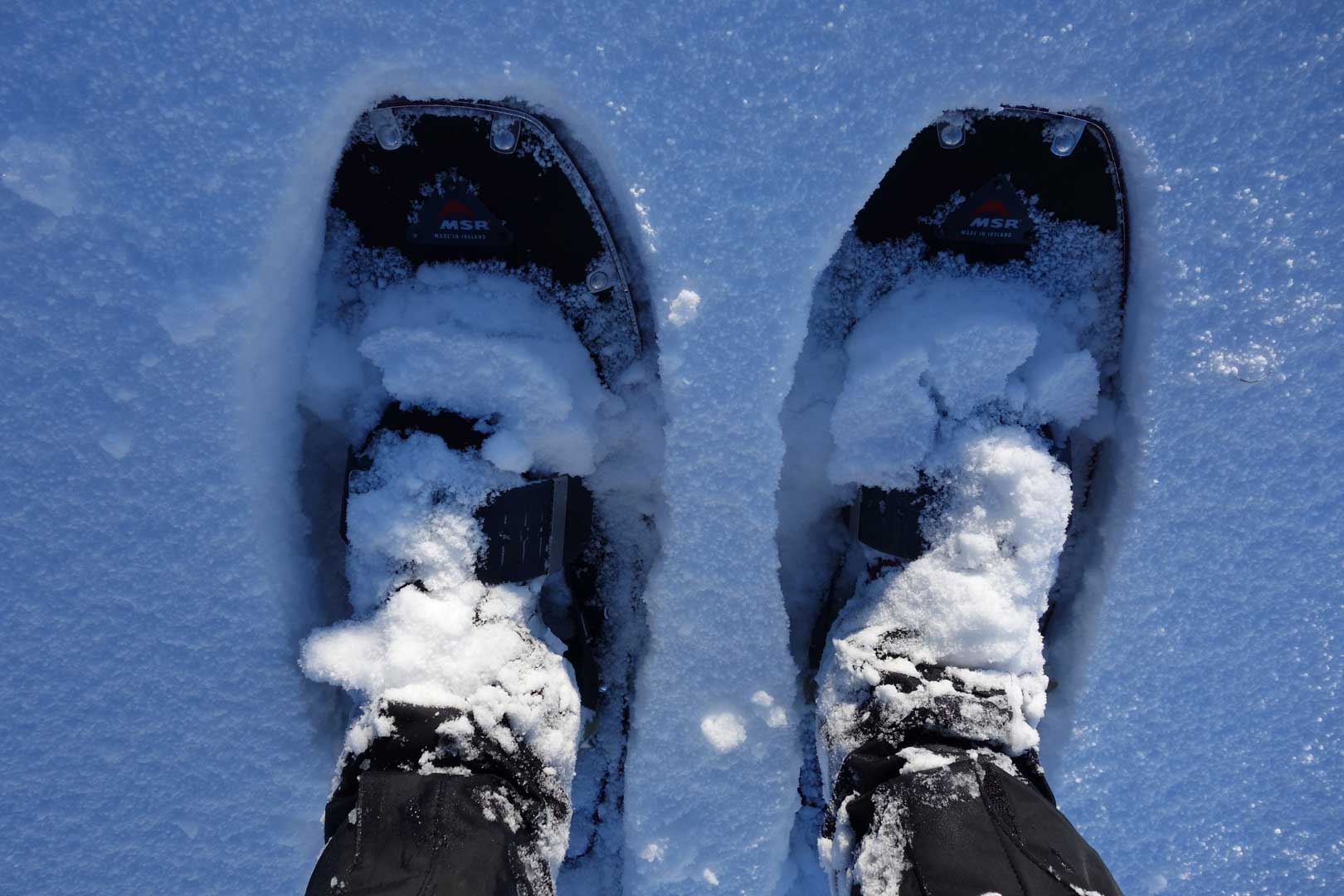 North of Ullapool are the haunting mountains. (Coigach and Assynt – Ben Mor Coigach, Cul Mor, Cul Beag, Suilven and Canisp). The remains of the process of glaciation from a far distant time. Their summits barely touched 840m in height. My eye was drawn to the contour lines which described the gnarly form of Cul Mor. This scenario was perfect – a moderate incline would take me up to Meallan Diomhain at 600m and onto a ridge. I would take my crampons with me as well; the ridge from 700m up to the summit was very steep. Besides I didn’t know if it was going to be a heavily boulder strewn ridge, unsuitable for wearing snowshoes or a smooth grassy ridge. The forecast was good. Any snow showers would dissipate by lunch time and there would be phenomenal views over to Suilven.

“You don’t see many walkers using snowshoes in the Scottish hills.”

I’m in a minority. You don’t see many walkers using snowshoes in the Scottish hills. I’ve been using snowshoes for seven winters now and I would never go back to the arduous and often brutal game of ‘post holeing’. Which we seem to embrace so readily as an outdoor activity in Scotland. Most of my snowshoeing trips are undertaken in the early winter in areas such as the Cairngorms. (Drumochter, Corrour, Creag Meagaidh and the Monaliaths). When snow becomes consolidated and easier to walk on from late February I start exploring narrow ridges wearing crampons.

I first read about snowshoes being used on the Cairngorm Plateau in the snowy winter of 2010/11. Spending that winter as an armchair mountaineer as my physio started a big job on me. I was happy to be watching the hills. From afar reading blogs and reports on how walkers and climbers were coping with travelling in the deep snow. There had to be a better way to travel on snow than ‘post holeing’ a way to a summit. Snowshoes could be the possible solution: I can’t, and have no inclination to ski.

Modern snowshoes have evolved in design over the years; being miles away of the simple tennis rackets that we think of as snow shoes. Steel frames produce a more durable frame and crampon than aluminum designs. Nylon plastic is used to make the platform. I use a pair of Women’s MSR Lightning Ascent snowshoes. A very durable mountaineering snowshoe with excellent traction in all snow conditions.

I notice the 4lbs of weight (per pair) is on my back. Strapped to the rucksack and not on my feet. A small price to pay for the dividends they offer once I’m using them on snow. Two sizes of snowshoes are generally available. 80 kg of Combined weight of a person and gear, therefore 22″ would be recomended. Use 25’’ snowshoes are for heavier weights. The underside edges of the snowshoes are serrated to give additional grip while there is a large steel crampon positioned under the ball of each foot.

The snowshoe hinges. This allows the crampon to be kicked aggressively if required into hard snow on steep ground. Many models also have a heel bar. This can be locked at your heel to keep the foot horizontal. It is worth buying a pair of snowshoes that can be adjusted so that each footprint is parallel to the other if you walk with a pigeon footed gait. Otherwise you will trip up on your snowshoes and plant your face in the snow.

I walked through the gate below Knockan Crag opposite Cul Mor. The snow was almost knee deep. Taking my rucksack off, released the straps which were holding my snowshoes onto my rucksack and strapped my snowshoes onto my feet, pulling the straps round the back of my heels tight. I was still wearing my gloves as there was a sharpness to the cold morning. I wished I had replaced my summer stoppers on the ends of my walking poles for snow daisies; if I pressed hard on my walking poles I was going to find out how deep the snow was at a given point. I followed the deep footprints which someone had created with such a huge amount of effort. They had followed a route which is a good foot path when uncover by snow.

Only once or twice the domed tops of tussocks indicated the edge of the path in an otherwise smooth white landscape. I flattened down the top of the prints with my large footprints. The snow was soft and light and very easy to walk on today. At times I walked beside the deep footprints, my prints only sinking down a couple of inches. It’s not always this easy though; at worst traversing thawing snowpack I can sink down to almost my knees but that is still better to sink this far rather than sinking down to my thighs in the same snow. The same goes for breaking through a frosty top crust into soft snow.

Ridges receded into the distance to the north east were the bulk of Braebag, Conival and Ben Mor Assynt blocked the views further across the wild country. Cloud was gathering on the summits, above me, the blueness of the morning sky had been replaced by the grey clouds of the snow showers which were driving in off the Atlantic. The feeling that the summit of Cul Mor would be enveloped in cloud.
Gaining a wide ridge below Meallan Diomhain, most of the snow had been blown from the ridge to reveal ice, last week’s snow before a brief thaw. I would be back walking on a good depth of wind deposited snow to the north of this tiny summit in a sheltered Corrie.  The stones on the ridge I had to weave through, sometimes following long runnels of snow which had been deposited in the sheltered areas.

All of a sudden Suilven came into view.

Firstly, There is no hill in Scotland like Suilven. Fore that matter, nor either in the rest of the world. Nothing! Suilven’s summit cap can be viewed from Lochinver to the northwest of Cul Mor, rounded, its rocky sides plunging more than 600m (2000ft) to the lochans which pepper the bog lands below. The hill’s unusual shape is a result of glaciation. In fact the Norse origin of Suilven translates as Pillar Mountain such an appropriate description for this mountain.

I wonder how the Norse regarded the mountain – evil because it looked like a place where demon gods lived or simply a place of awe because of its unusual formation. From where I stood on Cul Mor, Suilven was almost 3km long seemingly unclimbable wall topped by a ragged edge of summits. I stood mesmerized watching the clouds empty their wintery contents at the western end of the pillar; Suilven was an obstacle stopping any clouds from moving across to the higher ground on Braebag, nine miles away to the east.

The wind had picked up for the first time in the day and I became cold – time to move on. After Meallan Diomhain, I was back to snowshoeing on a good covering of snow, which I was expecting, but I barely made a mark on the hard surface of the snow. The ridge would take a semicircular curve up onto the summit but increase dramatically in its steepness for the last 200m in height. I carried on snowshoeing until the steepness made me asses my situation.

Looking up at the steepening ridge: There did not seem enough room to maneuver the length of my snowshoes amongst the boulders. I kicked myself a platform in the snow and removed my snowshoes. The rest of the ridge looked like it would be best tackled by kicking the edges of boots into the icy snow, if needed, steps could be cut into the hard surface with my ice axe.

“out of the bouldery terrain”

I was out of the bouldery terrain. Now plunging my feet deep into the soft wind slab, a snowball’s through from the summit. The views opened out to the Coigach hills. (Cul Beag, Ben More Coigach and Sgurr an Fhidhleir) A truly spectacular collection of hills flanked by huge black cliffs, their feet submerged in deep lochs. Snow showers enveloped this area; no world existed beyond the soft horizon.

I retraced my steps back to the snowy platform I had made earlier and then put my snowshoes back on. I walked back down Cul Mor with ease and at a fast pace, happily kicking up a plume of snow behind me. Perhaps this is the nearest feeling of absolute freedom a mountain hare feels as it bounds across a winter hillside. Give me a snowy hillside and a pair of snowshoes any day. This had been a wonderful day!

Free UK delivery and 30 days return. Orders shipped from within the UK Dismiss